Japan’s rapid modernization in the Meiji era and her participation in the world exhibitions in London, Paris and Vienna made her one of the most important vehicles for conveying East Asia culture to Europe. Japan’s dominance in the Far Eastern art market also had an influence on the Fischers’ collecting activities at the start of the 20th century, as they acquired not only outstanding Japanese art, but also important Chinese and Korean works from Japanese dealers. The focus of the Japan collection is on screen painting, calligraphy, ink painting, Buddhist sculpture and painting, as well as coloured woodblock prints, printed books and lacquer work. As a result of the bequest of Kurt Brasch (1907–1974), the museum also acquired important examples of Zen inspired ink painting. 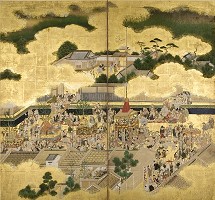 “Bishamon in his original form” (Bishamon no honji emaki), Scene in which the “gold prince” is reincarnated as Bishamon and he is riding his horse in order to save the princess, late 16th century, two of three scrolls, ink, gold, silver and colors on paper, 31 x 1104 cm, Museum of East Asian Art Cologne © RBA

The collection illustrates the leading schools of Japanese painting between 1400 and 1900. It includes screens with monochrome ink painting in the Chinese style as well as in the coloured palette applied to a gold ground characteristic of the native Yamatoe style. The screen with the colourful depiction of the Gion matsuri, a festive procession in Kyoto, is one of the most attractive and costly examples of the Japanese style. The museum also possesses a series of rare illustrated hand-scrolls (emaki) on historic legends, including the ‘Tale of the Guardian God Bishamon in its Original Form’. In addition, the so-called ‘flesh painting’ (nikuhitsu) of the Edo period is well represented, with its depictions of beautiful women from the world of the pleasure district. With the purchase of the Heinz Götze collection, the museum acquired a magnificent stock of Japanese calligraphy. The spectrum ranges from illustrated sutras across poems by masters of the early Rimpa school, for example the Autumn Poem by the famous calligrapher Hon-ami Kôetsu (1558–1637), all the way to the Zen Buddhist calligraphy of the Obaku school and works by scholar artists of the Edo period. Monumental works by Inoue Yûichi (1916–1985), which were exhibited during the 1960s in the Rudolf Zwirner gallery, along with a screen by Morita Shiryû (1912–1998), testify to the high status of calligraphy among the Japanese avantgarde of the 20th century. 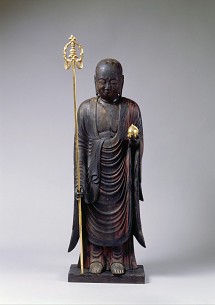 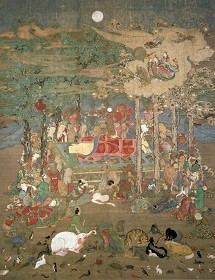 The collection of Japanese Buddhist art includes outstanding wood statues dating from the 9th to the 14th century, among which the figure, dating from c. 1100, of Dainichi Nyorai, the central Buddha of the esoteric school, particularly stands out. Made in the courtly elegant style, the figure is put together from a number of hollowed out wooden blocks (yosegi-zukuri) and excellently preserved apart from additions to the crown and forehead jewel. A statue of the Bodhisattva Jizô, who rescues the souls of the deceased from hell, is one of the highlights of the collection. Sacrificial gifts were found inside it, including the donation document dated 1249, which attributes the work to the famous sculptor Kôen. Among the most impressive examples of Buddhist cultic painting is the depiction of Buddha’s entry into Perfect Nirvana, dating from 1392, executed in the most delicate painting technique, with colours and gold on silk. 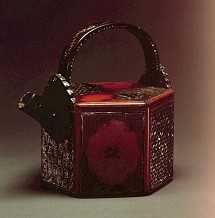 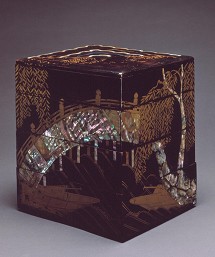 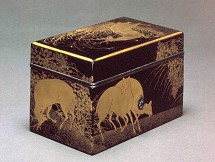 The collection of Japanese lacquer work was mostly acquired already by the museum’s founders, and was supplemented after the Second World War, above all with a view to replacing works stolen in 1947. The remarkable items include a four-part food cabinet and a cabinet for aloe wood, both of which illustrate the art of inlay techniques using gold, silver and mother-of-pearl, and also of the ‘sprinkled picture’ (maki-e). There are a number of unusual items on the collection, for example a sophisticated bird-cage with a cover for the night and a portable case bearing a signature of the Kachikawa school, which worked for the shoguns. No comparable birdcage is known to exist in Japan. 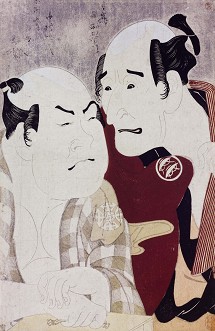 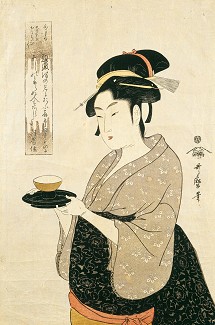 Some of the most important woodblock prints only joined the collection in the 1950s or later. These include ‘The Beautiful Okita’ by von Kitagawa Utamaro (1750–1806) and ‘Minister Toru’ by Katsushika Hokusai (1760–1849), which were purchased from the acclaimed collection of Theodor Scheiwe. Popular themes of the Japanese coloured woodblock print were, alongside beautiful women (bijin), actors in their famous roles, for example the two expressive character heads on a sheet by Toshusai Sharaku (active 1794–1795), as well as landscapes and famous places, such as the 36 Views of Mount Fuji by Katsushika Hokusai (1760–1849) or the 53 Stations of the Eastern Sea Road (Tôkaidô) and the 100 Views of Edo by Utagawa Hiroshige (1797–1858), and finally costly private editions of calendar sheets (surimono) of the poets’ circles. Japanese woodblock prints inspired European Japonisme, and, with their extravagant compositions and colours, exerted a major influence on European painting in the late 19th and early 20th centuries.

The furnishing of the Japan Gallery was financed with the kind support of the Commemorative Organization for the Japan World Exposition ’70. 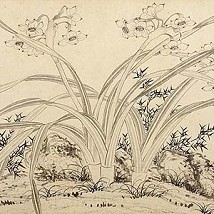